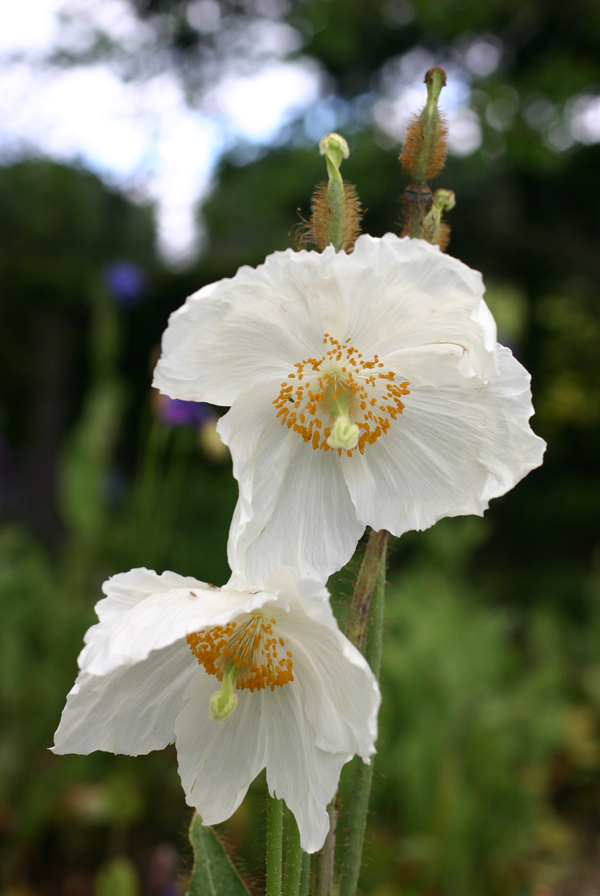 Back of a flower showing
occasional blue streak. Meconopsis ‘Marit’ is a white-flowered sterile cultivar, which originated in Norway. It is named after Marit Espejord, who raised the plant. It was introduced to Britain in 1998 via Finn Haugli, who was Director of the Arctic-Alpine Botanic garden at Tromsø at that time.

The cultivar has an interesting if perplexing history. In the 1980’s Marit Espejord used Meconopsis × sarsonsii, grown from seed supplied by the Swedish seed exchange, as a seed parent and Meconopsis ‘Lingholm’, grown from seed supplied by Thompson and Morgan, to provide pollen. Meconopsis ‘Marit’ was the best of the three resultant seedlings. Unfortunately, Meconopsis × sarsonsii, a cross between M. baileyi and M. integrifolia, is sterile, so the exact history of the cultivar is unclear.

Very, very occasionally traces of blue are observed on the white petals.

The white flowers are nodding to half nodding when they open but later face sideways. They are bowl-shaped. The four ovate petals overlap and have an undulating margin. Usually three or four flowers on short pedicels arise from the false whorl. The style is broad and the stigma is rounded. A hint of ginger hairs can be seen covering the style when the plant is in flower.

There are no seeds inside the short, ellipsoidal-shape capsule. Clump of Meconopsis ‘Marit’ in a garden setting.