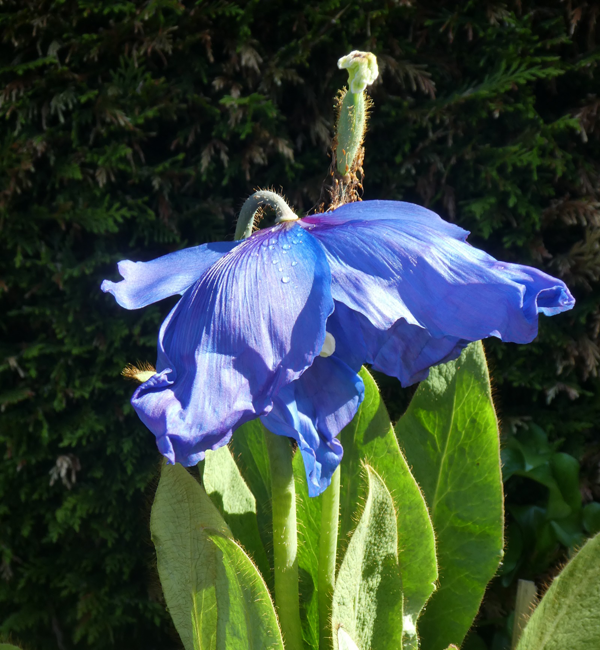 In the 1980s Liz Young, a member of The Meconopsis Group, grew seeds from the Scottish Rock Garden Club seed exchange that were described as M. grandis. She selected this particular plant from the various hybrids that came from the seeds and gave it the name ‘Mop-head’, because its large, floppy flowers hang down when they first open. Liz introduced it to The Meconopsis Group in 2002 and the name was ratified in 2007.

The large flowers are deep blue. The first flowers are the largest, up to 23 cm across, while later flowers are smaller. They open just above the mature leaves. The petals are ovate and overlapping. They tend to face sideways during the day but are nodding during the evening and at night. There are usually four, sometimes five, ovate petals, which are overlapping. As the flowers mature the stems elongate rapidly. Meconopsis ‘Mop-head’ is one of the earliest hybrids to flower, usually in early May.

The style inside the flower is often twisted. As the fruit capsule develops the twisting of the style becomes more noticeable. The capsules are large and relatively narrow and are covered in spreading, dark, long bristles.

The erect emerging leaves are deep green and covered with long, pale brown hairs. The mature basal leaves have long petioles. The blades are elliptical with entire but slightly sinuate margins.

Meconopsis ‘Mop-head’’ is a vigorous hybrid, which is easily divided. It should only be propagated by division to maintain its characteristics.

It does sometimes produce seed but these do not come true. Nodding and outward-facing flowers
just above the leaves.